Building Designed to be Recycled!

Posted on November 27, 2019 by The Rama Exhibition 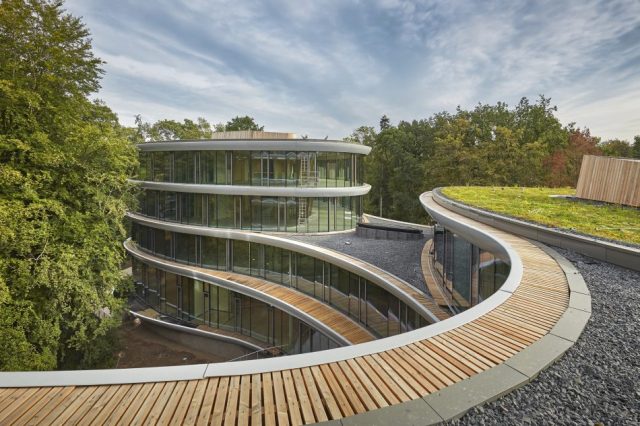 GREAT NEWS IN A NUTSHELL!

This office building was built with 165,312 screws with intent to allow for all building components to be recycled when the building outlives its purpose.  Comprised mostly of wood, it is designed in ways that allow for more use of natural light and has many other features that are environmentally friendly.

One amazing aspect is that solar panels over the parking lot charge electric cars (the system uses bidirectional charging, so the cars can send energy back to the building when it needs electricity). Changing rooms and showers encourage commuters to bike, and the site is near a train station. A green roof captures rainwater for flushing toilets. The office uses geothermal heating and cooling.

We read it first at Optimist Daily or you can read the full article here.

Calley O’Neill is a highly respected artist, muralist, visionary designer and social ecologist from the Big Island of Hawai‘i. Journalists have described her art, which spans four decades, as ethno-visionary, dynamic, symbolic and breathtaking. Calley finds her expression through classical glaze painting in mixed media works, public murals, stained glass and mosaic. Her landmark Healing Gardens of Makahikilua master plan for North Hawai’i Community Hospital in Kamuela received national recognition among top landscape architects in the field of therapeutic garden design. A great team player, Calley’s input raises the bar and sparks innovation toward healing the Earth and its inhabitants. Journalists have described her as ‘a way-finder’, ‘a life giving force’ and ‘a force of nature.’ Calley is known for exceptional quality draftsmanship, a crystalline mastery of glaze painting, stimulating diversity, relentless experimentation, and her love of the Earth and humanity. Her magnum opus is Rama, Ambassador for the Endangered Ones, and she continually works on the exhibition paintings in her Waimea studio and her plein air pop-up studio and tree gallery at the Four Seasons Hualalai at Historic Ka’upulehu, where she is the Artist in Residence. Her paintings are both visual prayers and wake-up calls. Calley earned a Bachelor of Fine Arts degree, summa cum laude from Pratt Institute, New York (1974) and a Master’s Degree in Social Ecology from Goddard College in Plainfield, Vermont (1977).
View all posts by The Rama Exhibition →
This entry was posted in and Articles of Note, Great News in a Nutshell, Health for the Planet. Bookmark the permalink.