Thank you Starbucks for this full-page ad in The Wall Street Journal!

My web designer, Julia Fairchild, found this full page ad in The Wall Street Journal, sponsored by Starbucks.  She reformatted it from the black and white block letters to this beautiful poster to share with the world.  Thank you Starbucks! 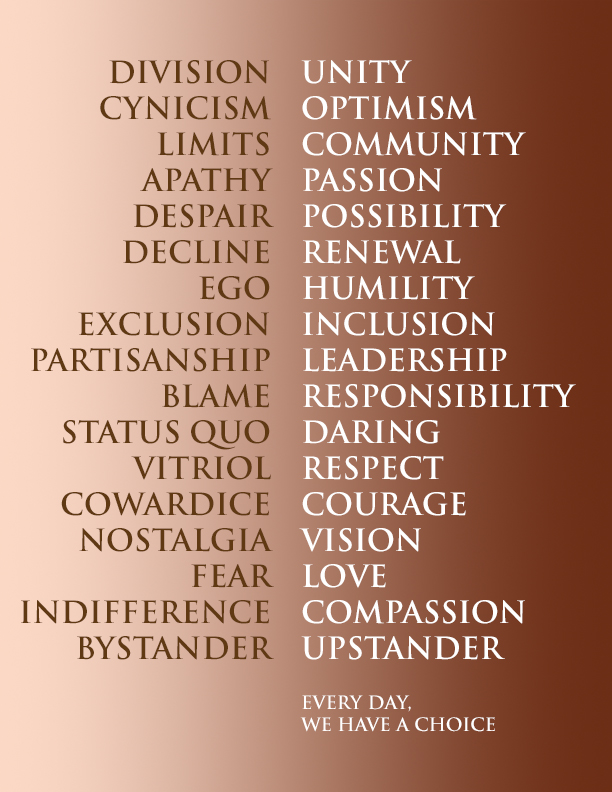 Calley O’Neill is a highly respected artist, muralist, visionary designer and social ecologist from the Big Island of Hawai‘i. Journalists have described her art, which spans four decades, as ethno-visionary, dynamic, symbolic and breathtaking. Calley finds her expression through classical glaze painting in mixed media works, public murals, stained glass and mosaic. Her landmark Healing Gardens of Makahikilua master plan for North Hawai’i Community Hospital in Kamuela received national recognition among top landscape architects in the field of therapeutic garden design. A great team player, Calley’s input raises the bar and sparks innovation toward healing the Earth and its inhabitants. Journalists have described her as ‘a way-finder’, ‘a life giving force’ and ‘a force of nature.’ Calley is known for exceptional quality draftsmanship, a crystalline mastery of glaze painting, stimulating diversity, relentless experimentation, and her love of the Earth and humanity. Her magnum opus is Rama, Ambassador for the Endangered Ones, and she continually works on the exhibition paintings in her Waimea studio and her plein air pop-up studio and tree gallery at the Four Seasons Hualalai at Historic Ka’upulehu, where she is the Artist in Residence. Her paintings are both visual prayers and wake-up calls. Calley earned a Bachelor of Fine Arts degree, summa cum laude from Pratt Institute, New York (1974) and a Master’s Degree in Social Ecology from Goddard College in Plainfield, Vermont (1977).
View all posts by The Rama Exhibition →
This entry was posted in Uncategorized. Bookmark the permalink.